To save the planet, Tide wants you to quit using warm water for laundry

Doing your laundry with cold water can help save the planet, and maybe save you some money along the way.

New York (CNN Business)Doing your laundry with cold water can help save the planet, and maybe save you some money along the way.

That’s the message from Tide in a newly launched campaign to decarbonize laundry. The goal is for consumers in North America to do three out of every four loads of laundry with cold water instead of hot by 2030, up from about half today. That would eliminate the power consumption required to heat cold water.
If this goal is met, Tide told CNN Business it will have the same impact on greenhouse gas emissions as removing about a million cars from the road for a year.

This is going to be the defining decades for where we end up on climate change.”

“There is no tradeoff. You will save $150 a year in energy costs, your garments will last longer. And by the way, you’re helping to save the planet,” Shailesh Jejurikar, CEO of Procter & Gamble’s fabric and home care division, said in an interview. “It’s a beautiful win-win-win if we get this right.”
The announcement marks the latest effort by a major company to show how it is taking the climate crisis seriously.
“This is going to be the defining decade for where we end up on climate change,” Jejurikar said. “If we don’t get this situation under control in the coming years, we are going to pay the price. There is a need to act now.”

‘Consumers want to do something’

Beyond its focus on cold-water washing, Tide set a new goal of cutting greenhouse gas emissions at its factories in half by 2030. That’s in addition to the progress it already has made cutting emissions by three-quarters over the past decade as the brand adopted 100% renewable energy at its manufacturing plants.
Tide also plans to reduce its carbon footprint by using 100% recyclable packaging for all products by 2030 and by teaming up with Silicon Valley startup Opus12 to capture carbon from its factories. 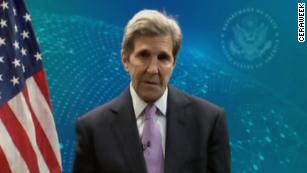 John Kerry has a warning for Big Oil
Jejurikar said P&G does want to get to zero emissions in its factories, but added that how people use Tide products has 10 times more impact than what happens in its plants.
“More and more consumers want to do something. We are trying to give them a chance to take their ordinary daily actions, and make them have an extraordinary impact,” Jejurikar said.
Instead of “preaching to people,” the P&G exec described a “fun” marketing campaign that will feature cameos by wrestling legend “Stone Cold” Steve Austin and rapper and actor Ice-T.

First, though, Tide must convince people that cold water can clean dirty clothes as well as hot water. That may be an even tougher challenge now because throughout the pandemic medical experts drilled into Americans the importance of washing their hands with warm water to kill germs.
Tide plans to make its case by showing that the detergent can beat bargain brands using warm water. The company is teaming up with Hanes to show that this is even true when washing underwear, T-shirts and socks. 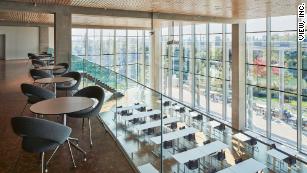 This smart window company is on a $1 trillion mission to eliminate blinds and shades
“We have amazing technologies across the board that ensure consumers will not see a difference,” Jejurikar said.
Tide says its estimate for greenhouse gas reductions in the United States and Canada by switching to cold water is based on the more than 25 billion loads of laundry done each year in the two nations.
The brand says that going from less than half of washes being done with cold water in 2020 to three-quarters by 2030 will wipe out 4.25 million metric tons of greenhouse gas emissions. The EPA’s greenhouse gas equivalencies calculator indicates that is about equal to taking a million cars off the road for a year.
P&G (PG), one of the largest advertisers in the consumer space, plans to spend tens of millions of dollars on the cold water washing campaign in traditional advertising, social media and inside stores.
“We are putting the full power of the marketing machine behind this,” Jejurikar said.
Correction: A previous version of this story incorrectly stated the number of loads of laundry done each year. The United States and Canada together do 25 billion loads annually.